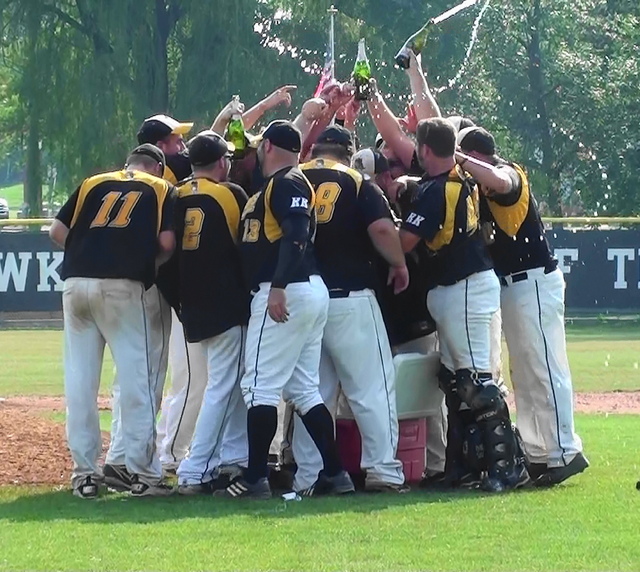 The Hawks (25-12 overall) were like a team on a mission during the post-season as they won every game, (five of the seven were decided by one run and two in extra innings) after finishing the regular season with a mediocre 9-7 record. They won the RRL play-in game against the Hustisford Astros 7-3 and went on to knock off the RRL North #1 seeded Kewaskum A’s 2-1. Hartford then defeated the #2 seeded Brownsville 49ers 5-4 before sweeping the Rubicon Red Sox 4-3 & 3-2 (in 11 innings) to win the North Division title.
Game one of the best-of-three Grand Championship series was played in front of a large crowd at Schilberg Park in Milton on September 1st and the Hawks prevailed 3-0 in 12 innings behind the strong pitching of Matt Buhrow and timely hitting from Tyler Klandrud. When asked what he felt the key to the game was, Milton Raptors manager Doug Welch said “We didn’t hit Buhrow. He hit his spots, had good velocity and kept the ball down.” Buhrow, a former pitcher at Carroll University, has had an interesting last year as less than twelve months ago (Sept. 11, 2012) he had Tommy John surgery on his right (pitching) elbow and wasn’t cleared to begin throwing until just after the season began. Hawks manager Ben Kluck talked about Buhrow’s comeback “well, we slowly worked him back into it , you know, two, three innings here and there and as the season wore on we stretched him out a little more. It also was a lot of me trusting him to let me know how his arm felt. He’s a bulldog. He’ll go out there and fight for you until you have to go get him”. Going out and getting him happened rarely throughout the playoffs.
With the Hawks one win away from their first RRL Grand Championship, the series moved to Hartford’s West Side Park for game two and the Hawks didn’t let down an even bigger crowd of hometown fans. In the top of the first inning, Buhrow struggled with his control, walking three Raptor batsmen and giving up a double to Josh Schere which resulted in the Raptors scoring two runs. The Hawks knew they had to get to work and that is what they did as Jordan Stephans lead off with a single to centerfield and stole second. Cale Klink then bunted him over to third before Tom Kluck scored him on a groundout to short. The score remained unchanged until the bottom of the fourth when the Hawks plated a run when Tom Kluck lead off the inning with a single and was bunted over by his brother Jim before DH Tyler Klandrud knocked him in with a groundball single to center field. The score was tied until the bottom of the sixth when the Hawks struck again with two runs on a walk, a Klandrud double and a Derek Hall single.
Buhrow, who is from Edgerton (which is 5 minutes from Milton), was locked in a tight pitchers battle with childhood friend and starting Raptors pitcher Sean McCann as they both continued to shut down hitters until the eighth when Buhrow gave up a lead off double to Dave Sagitis. Sagitis advanced to third on a pass ball and scored on a sacrifice fly to center field by Scott Steinke. Buhrow then struck out the next batter to get out of further trouble with the Hawks clinging to a narrow 4-3 lead. Buhrow credited the Hawks strong defense saying after the game that “No matter how I pitch, I have the confidence in the defense behind me. If I throw a ground ball I know that Tom, Jim, Cale, or Chad are going to make the play. I know if there is a flyball to the gap that Derek, Jordan, Zach or Joe are going to get there. The Hawks Milton down 1-2-3 in the ninth inning and it was time to spray the champagne.
Hawks Shortstop Jim Kluck remarked shortly after the game “I played my whole life with my brothers and nothing makes me happier than to be able to win a Rock River championship with them.  And we wouldn’t be in this position without my dad  as he really made us understand the true meaning of hard work and dedication. This ones for him.” Former Carroll University standout and current Hawks centerfielder Jordan Stephans said “when we got down early  I think it was big to get that run  after they got two in the top of the first“.  “We barely got into the playoffs but we proved that anything can happen and here we are, champions!”
view slideshow